Our Last Chance to Rescue our Rhino from Extinction | WWF Malaysia

Our Last Chance to Rescue our Rhino from Extinction 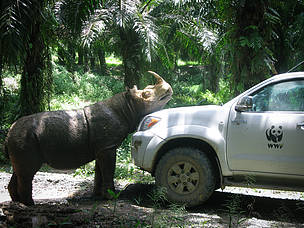 It was fervently hoped that the rhinos would be able to breed in captivity. Sadly, scientists discovered that Iman, and Puntong, another female rhino, could not reproduce naturally. Females of this rhino species can develop cysts in their reproductive organs if they do not mate for a long period of time.

Experts decided to use Assisted Reproductive Technology (ART) to breed the remaining three rhinos by collaborating with their Indonesian counterparts to exchange gametes. To expedite the collaboration, WWF-Malaysia urged the Government of Malaysia to raise the issue at the annual 2015 Heart of Borneo Trilateral Meeting.

WWF-Malaysia was invited on behalf of the government to make the proposition that ART represents the best chance of breeding the captive population of Sumatran rhinos. The matter was brought up to the annual Summit between the Malaysian Prime Minister and the Indonesian President. However, despite the high levels of diplomatic engagement, the ART efforts have yet to take place.

Without this intervention, and once Iman, the very last of our Sumatran rhino perishes from our soil, our rhino will be no more. We hope Tam’s passing will not be in vain and we wish for Iman being the last rhino to galvanise our effort to perpetuate the species in Malaysia. WWF-Malaysia calls on the government to enhance diplomatic efforts towards Indonesia, in order to help save this species by allowing ART to take place.

WWF-Malaysia (World Wide Fund for Nature-Malaysia) was established in Malaysia in 1972. It currently runs more than 90 projects covering a diverse range of environmental conservation and protection work, from saving endangered species such as tigers and turtles, to protecting our highland forests, rivers and seas. The national conservation organisation also undertakes environmental education and advocacy work to achieve its conservation goals. Its mission is to stop the degradation of the earth’s natural environment and to build a future in which humans live in harmony with nature, by conserving the nation’s biological diversity, ensuring that the use of renewable natural resources is sustainable, and promoting the reduction of pollution and wasteful consumption.  For latest news and media resources, visit http://www.wwf.org.my/media_and_information/media_centre/

Note to the media:
Photo caption: Tam was first sighted at the Kretam plantation in Lahad Datu, Sabah in 2009.

Tam was first sighted at the Kretam plantation in Lahad Datu, Sabah in 2009.
© WWF-Malaysia/Richard Sanggul Enlarge
Like this article?