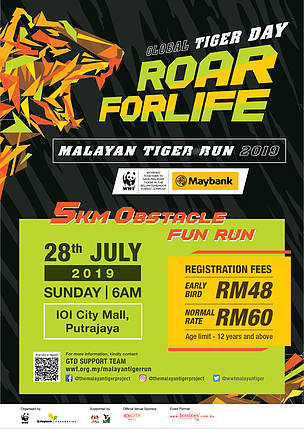 Scheduled for the morning of 28 July 2019, the Malayan Tiger Run is supported by the Ministry of Water, Land and Natural Resources and the Department of Wildlife and National Parks, Peninsular Malaysia. The event will take place at IOI City Mall Putrajaya between 6am – 12pm, and 4,000 participants are expected to sign up in support of tiger conservation efforts in the country.

“This is the first public event of this scale, and the objective is to bring together people who are ready to be a voice for our Malayan tigers through an educational and fun sporting event. WWF-Malaysia aims to raise greater awareness on the critical state of Malayan tigers in the country, and encourage more people to make a stand and speak up in support of on-going tiger conservation efforts,” said Sophia Lim, Executive Director/CEO of WWF-Malaysia.

In 2010, at the Global Tiger Summit in Saint Petersburg, the governments of tiger range countries agreed that global tiger numbers were at a critically low level, with as few as 3,200 remaining in the wild. A joint commitment was then made to double the number of tigers by 2022, which was termed as TX2. This remains as one of the most ambitious and visionary species conservation goals that have ever been set. It was also at this summit, that Global Tiger Day was first celebrated.

NGOs, enforcement authorities, corporate stakeholders and local communities alike are racing to keep Malayan tigers alive. In 2016, Maybank Foundation launched a partnership with WWF-Malaysia to support its on-going tiger conservation efforts in the Belum-Temengor Forest Complex which started in 2007. To date, Maybank has committed over RM5 million in funding until the end of this year.

As a result of WWF-Malaysia’s advocacy efforts under this partnership, in 2017 the Perak State Government announced the registration of Royal Belum State Park, an important tiger recovery and conservation site in Malaysia, for Conservation Assured | Tiger Standards (CA|TS). CA|TS is an accreditation scheme to ensure that the registered area has every aspect needed for effective tiger conservation efforts. This commendable commitment from the Perak State Parks Corporation places Malaysia on the map as the very first country in Southeast Asia to work towards achieving CA|TS.

Poaching, however, still remains the most urgent and critical threat to the Malayan tiger. Encik Shahril Azuar Jimin, CEO of Maybank Foundation said that the role of corporates in conservation is a crucial component in fighting poaching in Malaysia. “The support of corporate Malaysia towards tiger conservation efforts can play a major role in improving protection efforts, especially now. The tiger is a symbol of national strength and courage. In fact, Maybank’s Core Values are also inspired by the Malayan tiger and the elements of tiger is used extensively in many of our initiatives. One of them was our MyTIGER Values 2018 art competition and exhibition that was aimed at encouraging and creating greater awareness of the need to save our tigers. If we lose our tigers, it would also mean losing that sense of national pride,” he said.

It is therefore important that protecting Malayan tigers becomes a national priority. Nepal has seen success at doubling their tiger numbers from the baseline of 2013. However, Malaysia has unfortunately seen a decline in tiger numbers in the past decade.

The Malayan Tiger Run hopes to symbolise a unified voice and force of Malaysians, rallying behind the call of YB Dr Xavier Jayakumar, Minister of Water, Land and Natural Resources, to make tiger conservation a priority for the next two years. Therefore, WWF-Malaysia will be launching a public tiger pledge on Global Tiger Day, aimed at providing a platform for Malaysians to symbolically support on-going tiger conservation efforts being carried out by both NGOs and the government alike. WWF-Malaysia and Maybank believe that there is still hope to protect our Malayan tiger for generations to come. We can still ensure their survival if we act now, instead of simply documenting their extinction.

This Global Tiger Day, make a stand, spread the message and be a voice for our tigers. Sign up now for the Malayan Tiger Run – Roar For Life! by visiting wwf.org.my/malayantigerrun