Foreign Poachers wiping out Our Tigers 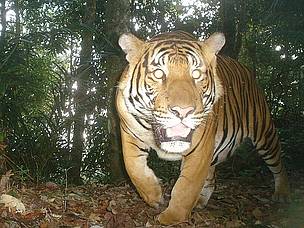 Panthera tigris jacksoni (Malayan Tiger)
© WWF-Malaysia / Lau Ching Fong
Kuala Lumpur: Where there is demand, there will be a need for continuous supply. The fate of our Malayan tigers, a species that is now rapidly disappearing from Malaysian forests due to rampant poaching and the illegal wildlife trade, is at the centre of this vicious cycle.

Three months ago, six Vietnamese poachers who were believed to be a part of an illegal network targeting mainly tigers were arrested in a raid by PERHILITAN in Pahang. NST’s exclusive report on tiger hunting yesterday also highlighted the involvement of foreign poachers working on farms in Gua Musang, who have been allegedly hunting and selling tigers at a price of at least RM20,000 each.

The influx of foreign poachers has been highlighted repeatedly by both government bodies and NGOs alike. With proof of their presence in and around tiger habitats across the country, it is becoming increasingly clear that poaching by foreigners is widespread and not just localised at one or two sites.

The evidence of these foreigners in our forests reiterates the urgent need for Malaysia to immediately step up wildlife protection efforts on the ground at a national level. Since coming into office, YB Dr Xavier Jayakumar (Minister of Water, Land and Natural Resources) has been a strong advocate for greater protection of Malayan tigers, having already initiated discussions on stronger collaborations between enforcement authorities such as the police and armed forces. WWF-Malaysia commends and supports the minister’s efforts in pushing for more intelligence-based and collaborative anti-poaching efforts. However, we need to act fast, especially now where the need is ever so critical.

The illegal wildlife trade is an organised crime that operates the same way illegal drugs and weapons are dealt with – by dangerous international networks – linking across the globe. The scale of the global illegal wildlife trade as a business is massive, with the United Nations Environment Programme (UNEP) valuing it between USD7 to 23 billion a year in 2017. In a report[1] released in March 2017, UN Environment and INTERPOL have also estimated the value of environmental crime up to USD258 billion annually. With a growth rate of five to seven per cent each year, environmental crime is outpacing the growth of our global economy by two to three times. After narcotics, human trafficking and weapons, wildlife crime is the fourth most lucrative illegal business in the world.

While the future seems bleak for Malayan tigers, WWF-Malaysia believes that there is still hope. Nepal recently announced their success in doubling tiger numbers in the country. They have also managed to achieve 365 days of zero poaching for rhinos, elephants and tigers between 2013 to 2014. This was only possible due to collaborative and focused efforts between enforcement agencies and regulatory bodies such as the National Tiger Conservation Committee (chaired by the Prime Minister of Nepal) and the Wildlife Crime Control Bureau under the Nepal police. These bodies were established to specifically and holistically address poaching and the illegal wildlife trade from an enforcement perspective. Nepal’s success has given other tiger-range countries clear direction and guidance.

Last year, Perak state made history by becoming the first in Southeast Asia to register Royal Belum State Park for Conservation Assured Tiger Standards (CA|TS), which is an accreditation scheme that encourages tiger conservation areas to meet a set of standards and criteria to assure effective and long-term tiger conservation. The state also committed to achieving zero poaching by 2020, both at a High-Level Dialogue on Enhancing Tiger Conservation Efforts held in July 2017, as well as at the Royal Belum-WWF Conservation Summit in November 2017.

More recently, the first ever National Conservation Assured Tiger Standards (CA|TS) Mini Lab in July 2018 (jointly organised by PERHILITAN and WWF-Malaysia) discussed issues and ways to strengthen tiger conservation and protected area management through CA|TS. The mini lab which was officiated by YB Dr Xavier Jayakumar, also focused on ways to address the poaching crisis in Malaysia through the experience and insights of high-ranking army, government and WWF officials from Nepal as well as government leaders from Bhutan.

However, despite all the progress we have made thus far, time is fast running out for our tigers. It is now very likely that we have less than 250 Malayan tigers left in the wild due to the poaching crisis we are facing. The Malayan tiger proudly flanks the jata negara as a representation of strength and courage. Losing the Malayan tiger will mean losing Malaysia’s symbol of national pride and identity.

The demand needs to stop, and the supply has to be cut off. The former will take time but the latter can be done now by enabling more boots on the ground, especially with support from law enforcement agencies such as the army and police. By practising intolerance towards wildlife crimes, there is still hope to protect our Malayan tiger for generations to come. We can still ensure their survival if we act now, instead of standing by the side lines while their extinction is documented.

The Malayan tiger must be made a national priority. The time to act is now.