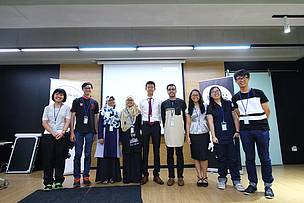 Sembang@WWF participants
© WWF-Malaysia / ESD
27 April 2016, Petaling Jaya: WWF-Malaysia’s Education for Sustainable Development (ESD) Programme hosted the second edition of Sembang@WWF 2016 in conjunction with Earth Day on 23 April 2016. The bilingual story-telling platform empowered youths and students to speak and share their ideas on environmental sustainability activities to a larger audience. This is in line with ESD’s aspiration to create and develop young leaders who are capable and willing to change their mindset and behaviours for a more sustainable future.

Seven young conservation heroes inspired the audience by passionately showcasing their conservation-in-action stories that made a difference. They studied relevant current issues, such as haze, wildlife poaching, shark finning and sustainable design, and had to undergo numerous rehearsals and tests before sharing their presentations with the audience. The content of their presentations had been guided and verified by WWF-Malaysia in-house experts.

Ng Yong Zheng, who represented the Eco-Schools Progamme of WWF-Malaysia, emphasised the need to address climate change through his talk, “We Are Living in South Haze Asia”.  He shared his views on the impact of haze from the perspective of a 17-year old student.  Yong Zheng, a student of Sekolah Sri Bestari, Bandar Sri Damansara, had had a series of haze-related encounters and likened the situation as living in a highly toxic zone and shared the need to put on face mask, cap and long-sleeved shirt only to go out cycling around his neighbourhood. He called on every fabric of the society from NGOs, government, business and industries to develop a vision and solution to combat the annual haze occurrence, because it was everyone’s responsibility.

His view was echoed by Tey Shu Han, who represented Eco-Institutes Programme of WWF-Malaysia in “Kembalikan Udara Segar Saya” (Please return my fresh air). She underlined the need to think locally and act locally.  Shu Han quoted Wangari Maathai, recipient of Nobel Peace Prize winner 2004 from Kenya who said, “You must not deal only with the symptoms. You have to get to the root causes by promoting environmental rehabilitation and empowering people to do things for themselves.”  The future early childhood education teacher believed children gained the understanding on the importance of trees and its function in providing oxygen and absorbs carbon dioxide through kinaesthetic learning activities from an early age.

In showing their commitment to WWF-Malaysia’s  “My Fin My Life” campaign,  Khou Jerome and Nurul Syazwani Mohammad Zikri, both representatives from Eco-Institutes Programme and Jessadine  Rose Baluyot, from Eco-Schools Programmes, took the challenge to call people to stop shark finning and shark fin soup consumption. Future teacher Khou stressed the importance of highlighting the significance of sharks and their survival in marine eco-systems through science education, while Jessadine believed in the power of the social media to help build society’s awareness on the issue.

In their presentation entitled, “Give Our Hands to Sharks” and “Shark Finning – It’s not Fin-tastic” respectively, both Khou and Jessadine, highlighted a pertinent point in the preconceived notion of sharks.  The Hollywood film industry mainly and the mass media specifically has always portrayed sharks as ferocious and aggressive beasts that live in the deep oceans killing people in a single bite.   Khou said that most sharks are not killed due to their threat to the human lives rather due to the shark fins industry.

Both Khou and Jessadine remarked that shark fin soup indulgence reflected the prestige of those who could afford the delicacy but in reality, it was by itself tasteless with a jellylike consistency. “The only thing that made the soup palatable is the chicken stock and other ingredients added to it,” they added.  Jessadine revealed surprising statistics on the tourism revenue from sharks diving versus the shark finning industry. “In the Bahamas, a single live shark in a healthy habitat is worth as much as $200,000 in tourism revenue over its lifetime.  In comparison, the meat from a harvested shark sells for an average of $50 for 68kg shark. In Fiji, a live shark is worth $30,000 for every year that it lives. Try comparing that to the one-time value of their fins, that is $150,” she said.

Nurul Syazwani, a future educator from Institut Pendidikan Guru (IPG) Kampus Pendidikan Islam, also relayed her view on shark conservation from an Islamic perspective, where Quran and hadith has always emphasised human stewardship and human responsibility as the greater being on earth, and the need to care for animals and their welfares.

Nor Nadiah Mod Najib, another representative from Eco-Institutes, called on the society to stop consuming meat on endangered species and  the buying of their organs and body parts in her talk entitled “Pemburuan Haram: Kita Mampu Mengubahnya” (Illegal Hunting of Wildlife: We Can Stop Them). Nor Nadiah, who was also from IPG Kampus Pendidikan Islam, said that though God has created plants and animals for humans, we were reminded to use them sparingly and not excessively.

Muhammad Anwar Ibrahim Seeni Muhammad, the sole representative from Youth Empowerment Programme, delved on the topic of careers in sustainability in his talk entitled, “Engineering A More Sustainable World”. The 21 year old future Engineer from Universiti Teknologi Petronas, who was currently an intern, shared his reflection on his contribution to finding a solution to a “zero-waste” method in a thumb-drive producing company. He enlightened the audience on the basic three-steps of “avoid, reuse and reduce”, the most basic yet significant steps that an engineer can do to promote sustainability.  “In the 21st century, engineers should change their mind set from ‘building things’ to ‘meeting needs sustainably’”, he said.

When asked on their plans right after Sembang@WWF, Khou who is also president of the environment club in his campus said, he wants to promote Eco-Schools Programme to some of the schools in Johor Bahru. At a personal level, “I want to encourage friends and families to stop consuming shark fin soup” he said.  As for Shu Han, “I want to plant more trees, connect it to pre-school education” she said. 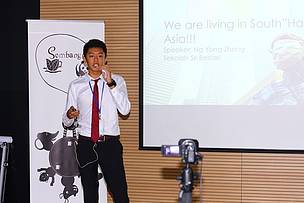 Ng Yong Zheng - Title: We are Living in South Haze Asia "We cannot depend on environmental NGOs only to overcome polution. It is everyone’s responsibility if all of us want clean air to breathe. We must ensure corporations, big or small, embassies and governmental agencies to work together with the people to ensure this problem can be solved"
© WWF-Malaysia / ESD Enlarge 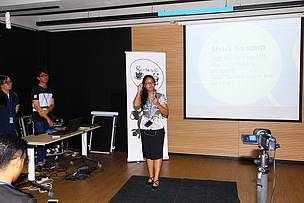 Ng Yong Zheng - Title: We are Living in South Haze Asia "We cannot depend on environmental NGOs only to overcome polution. It is everyone’s responsibility if all of us want clean air to breathe. We must ensure corporations, big or small, embassies and governmental agencies to work together with the people to ensure this problem can be solved"
© WWF-Malaysia / ESD Enlarge
Like this article?