Inspiring Social Entrepreneurs in the Highlands 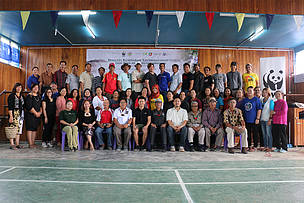 A group photo with participants and workshop trainers and facilitators in Bario.
© WWF-Malaysia
23 March 2016, Miri: A total of 125 participants from indigenous communities in the highlands of Sarawak attended a series of workshops on social entrepreneurship (SE) held in Long Semadoh, Ba’ Kelalan and Bario between 8 and 11 March 2016.

The purpose of the workshops was to raise awareness on SE and its potentials to the communities as well as the benefits that SE can contribute to social development and environmental conservation. The workshop also aimed to seek SE champions among the rural communities of Sarawak. These workshops formed part of MaGIC’s SE Rural Outreach Programme.

As of 2015, there are only about 150 social enterprises in Malaysia, a very low number if compared to our neighbouring countries such as Thailand and the Philippines which have 700,000 and 30,000 respectively.

WWF-Malaysia Senior Community Engagement and Education Programme Officer Alicia Ng  shared, “We believe that developing SE is important because successful enterprise would eventually contribute to our objectives in conserving the forest where local communities themselves manage conservation initiatives independently.”

“SE initiatives can encourage local communities to start their businesses with considerations of social and environmental impacts in their business model, as form of alternative livelihoods instead of fully depending on natural resources,” she added.

According to Ehon Chan, Executive Director of MaGIC SE, the programme is designed to be inclusive so that there is a programme for all social entrepreneurs at every stage.

“There are tremendous amount of opportunities in the highlands and we hope that we’ll see some of these social entrepreneurs start progressing through some of our programmes as they grow their ventures.”

“MaGIC SE hopes that these training will inspire local communities to venture into social entrepreneurship and see the various social problems faced by the communities as business opportunities,” he said.

Furthermore, MaGIC SE will develop a more comprehensive module to further develop the skills of these aspiring entrepreneurs in rural and remote area,” he added.

During the workshops, trainers from MaGIC SE raised awareness on SE, the business model and opportunity for the local communities in the accelerator programme that supports selected SE start-up twice a year. Another trainer from YIM presented the fundamental of entrepreneurship and marketing tips that was specially designed for the audience. In the last session, participants were asked to think of social and environmental issues that are crucial to solve and brainstormed SE ideas that are relevant and suitable for their areas.

“We hope that there are continuous follow-ups on the workshop results that will be able to train and help our people to setup their own SE ventures which can help the local communities as well as the environment.”

The organizers hoped that these workshops will unlock some inspiration for the local communities to work on various projects from preservation of arts, heritage and culture, to conservation of the natural environment threatened by unsustainable use of resources and impacts as the result of assimilation and modernisation.

A group photo with participants and workshop trainers and facilitators in Bario.
© WWF-Malaysia Enlarge 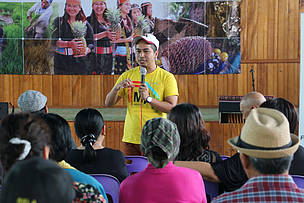 Hairol Ahmad, Programme Manager from MaGIC SE during his session on introducing MaGIC SE unit and how to identify SE business to participants in Bario.
© WWF-Malaysia Enlarge 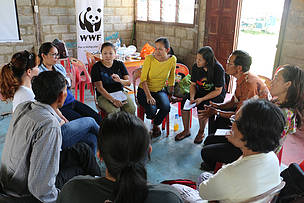 WWF-Malaysia Senior Community Engagement and Education Officer Alicia Ng (seated centre) facilitating a group in Ba’ Kelalan during the brainstorming session on potential SE business in the highlands that can solve problem with high transportation cost.
© WWF-Malaysia Enlarge
Like this article?