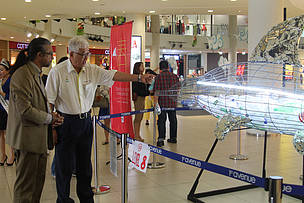 Malaysia is ranked as the world’s 9th largest producer of shark products and 3rd largest importer in volume terms, according to the Food and Agriculture Organization of the United Nations (State of the Global Market for Shark Products report, 2015). 84% of this imported shark fins were consumed domestically. Between 2004 and 2011, an average of 1,384 metric tonnes of imported shark fins were consumed annually in Malaysia.  In the past ten years, the volume of shark fin consumption has increased by an average of 54% per year. 2004 was a significant year, as we increased our fin consumption from 38 to 366 metric tonnes in just 1 year, and we have increased steadily our fin import to 3,072 metric tonnes in 2011.

Speaking at the launch ceremony, YB Phee Boon Poh, Penang State Exco for Environment, Welfare and Caring Society, said, “Shark fin soup traditionally symbolises wealth, power, prestige, and honour to the Chinese community. However, the reality is shark is an endangered species that should be protected, and therefore, we need to change the way we look at sharks. In line with this, the Penang State Government is pleased to collaborate with WWF-Malaysia and urge restaurants and businesses to gradually remove shark fins from their menus and corporate events. We also call for the Malaysian public to stop consuming shark fin soup.”

The Penang State Government has pledged not to serve any shark fin soup at all state official functions since June 2015. Hotel chains such as Shangri-La and Hilton have also removed shark fins from their menu and committed to sourcing for sustainable seafood.

Stressing the critical need to protect the species, WWF-Malaysia's Executive Director/CEO, Dato' Dr Dionysius Sharma said, “Shark fin is the most valuable of shark products. The high demand for shark fin is currently the main driver to unsustainable shark fishing globally. It is estimated that at least 1.4 million tonnes or 100 million shark individuals are killed per year. Global shark tourism generates revenue of around US$314 million annually and is expected to keep growing to a potential $780 million annually over the next 20 years.”

Sharks are keystone species in the oceans and are at the top of the marine food chain. They keep the fish population in check and healthy by eating old, sick or slower fish, and prevent the potential outbreak of diseases and strengthens the gene pool of the prey species. Only stronger and healthier fish remain to reproduce in greater numbers, which leads to much more healthier fish in the seas. According to various new studies (Predators as Prey: Why Healthy Oceans Need Sharks, July 2008 and Predators help protect carbon stocks in blue carbon ecosystems, Sept 2015), sharks also help maintain the health of coral reefs, protect vital sea habitats and even prevent climate change.

WWF-Malaysia works on mostly large-scale priority conservation areas that encompass a broad range of wildlife and ecological systems. These include a large marine conservation programme covering the Peninsular Malaysia and Sabah seas as well as habitat conservation for coral reefs, mangroves, seagrasses, fisheries and species like sharks. Its sustainable seafood work includes promotion of certified seafood that is caught or farmed sustainably.

In addition to the State Government, the science and fact-based organisation also works in partnership with Malaysian Nature Society (MNS), Reef Check Malaysia, Sabah Shark Protection Association (SSPA), Shark Savers and Scuba Schools International (SSI) on the My Fin My Life campaign to reach out to a wider audience. Business and public activities have also been planned in the Klang Valley and Kota Kinabalu. 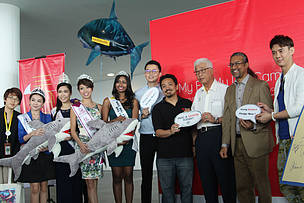