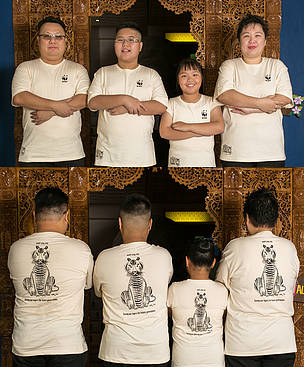 Delwin Cheah and his family wearing the creative T-shirt that he designed.
© Photo courtesy of Lawrence Cheah
Petaling Jaya, 17 August 2015 – Everyone is invited to support Malayan tiger conservation by visiting Mid Valley Megamall from 26 August to 20 September, when WWF-Malaysia will launch its new T-shirt designed by Delwin Cheah, Malaysia’s savant boy artist. Mid Valley Megamall will help build awareness about the importance of tiger conservation, in an engaging and interactive way, through their forest and tiger themed exhibition as well as hosting tiger conservation talks by WWF-Malaysia. There will also be merchandise sales by WWF-Malaysia, and all sales proceeds including the T-shirt designed by Delwin Cheah, will be channelled to the organisation’s conservation efforts.
“It is for future generations that WWF is striving to build a future in which humans live in harmony with nature. Therefore, we feel privileged to launch a T-shirt designed by 12-year-old savant artist Delwin Cheah to boost public awareness of the importance of tiger conservation and raise funds for our conservation efforts,” said Yeap Chong Wei, WWF-Malaysia General Manager of Marketing.
Artist Delwin Cheah added his support for tiger conservation by saying, “Save the tigers…Stop the killing!”
The T-shirt designed by Delwin is part of the Malayan Tiger Campaign in collaboration with Mid Valley Megamall, and will be available for purchase from 26 August to 20 September at WWF-Malaysia’s booth located on the 3rd floor, South Court. The campaign, held in conjunction with Merdeka and Malaysia Day, aims to raise awareness of the dwindling number of Malayan tigers in the country and the importance of saving our iconic Malayan tiger. The campaign includes interesting activities related to tigers and their habitat. There will also be special sessions with WWF-Malaysia experts sharing their tiger conservation experiences in Belum-Temengor forest with the public.
The Malayan tiger is one of the six remaining tiger subspecies in the world, and is found only in Peninsular Malaysia. Back in the 1950s, Malaysia was thought to have as many as 3,000 tigers. However, the subsequent loss of habitat due to rapid development and agriculture expansion, as well as widespread hunting, has subsequently reduced the local tiger population to an estimated 250 to 340 individuals.
Tigers require large swaths of forest to survive. By conserving tigers in their natural habitat, we are saving the entire ecosystem which is crucial for our own survival. This is because ultimately, forests provide us with water, oxygen, medicinal plants and other important resources. As the apex predator, tigers also ensure that the forest ecosystem is in balance.
Tigers are threatened throughout their range due to several reasons – they are poached for their body parts, hunted for sport, and killed when they come into conflict with humans. In more recent times, the use of tiger body parts in Chinese traditional medicine has become one of the main drivers which have led to the endangerment of wild tigers, via widespread poaching. However, none of their purported medicinal properties have been scientifically proven.
The Belum-Temengor Forest Complex in Perak is the focal area for WWF-Malaysia’s tiger conservation efforts, which is a priority site under the National Tiger Action Plan. The three pillars of WWF-Malaysia’s work include:
- Ends -
About Delwin Cheah
Malaysian savant boy artist Delwin Cheah has always loved nature and wildlife. Delwin’s Asperger’s syndrome does not prevent his exquisite artistic expression. His fluid, signature style is black and white, immaculately detailed drawings of forest scenes and animals which he creates using only pen and paper, without draft sketches or erasing tools.

As early as 2012, one of the Delwin's masterpieces was flown to the United Nations building in New York under the Strokes of Genius Art Exhibition in conjunction with World Autism Awareness. Delwin has held many exhibitions since then, and holds the world record of “World Youngest Savant Artist to hold Solo Art Exhibition”, awarded by Record Setter, USA. He is also the Malaysia’s Book of Records' Youngest Artist to Hold a Solo Visual Art Exhibition as well as the Malaysia’s Book of Records 2014 Most Outstanding Personality (Art Category). Delwin’s artwork has been presented to world leaders, and he has received letters of appreciation from both the President of the United States, Barack Obama, and Her Majesty Queen Elizabeth II of England.
About WWF-Malaysia
WWF-Malaysia (World Wide Fund for Nature-Malaysia) was established in Malaysia in 1972. It currently runs more than 90 projects covering a diverse range of environmental conservation and protection work, from saving endangered species such as tigers and turtles, to protecting our highland forests, rivers and seas. The national conservation organization also undertakes environmental education and advocacy work to achieve its conservation goals. Its mission is to stop the degradation of the earth’s natural environment and to build a future in which humans live in harmony with nature, by conserving the nation’s biological diversity, ensuring that the use of renewable natural resources is sustainable, and promoting the reduction of pollution and wasteful consumption.  For latest news and media resources, visit http://www.wwf.org.my/media_and_information/media_centre/
For further information:
Divya Prembaj, Senior Executive, Brand Activation, WWF-Malaysia
Tel: 03-74503773 (ext 6313)  Email: dprembaj@wwf.org.my

Delwin Cheah and his family wearing the creative T-shirt that he designed.
© Photo courtesy of Lawrence Cheah Enlarge 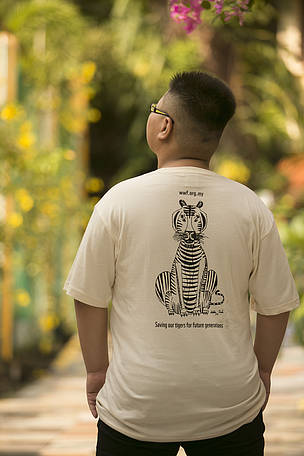 Delwin Cheah wearing the T-shirt that he designed
© Photo courtesy of Lawrence Cheah Enlarge
Like this article?