Deforestation rates in the Heart of Borneo worrying, yet hope remains | WWF Malaysia

Deforestation rates in the Heart of Borneo worrying, yet hope remains 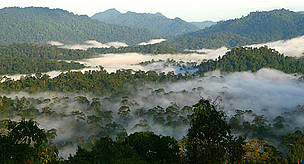 Forest range within the Heart of Borneo
© WWF-Malaysia/R.J.Alfred
8 May 2014, Jakarta, Indonesia: Forest cover in the Heart of Borneo (HoB) continues to fall. Seven years after the governments of Indonesia, Malaysia and Brunei Darussalam signed the Heart of Borneo Declaration to conserve one of the most important areas of tropical rainforest in the world, analysis by WWF shows deforestation rates in the Heart of Borneo have actually increased between 2007- 2012. Nevertheless, the results also indicates there is still time for governments and non-government organizations to significantly improve their impacts to both prevent forest loss affecting species survival and the provision of ecosystem services to the people of Borneo.

The Environmental Status Report of the Heart of Borneo 2014 is the second edition of the ecological health of the Heart of Borneo conducted by WWF. It focuses on the use of satellite imagery to monitor changes in different forest types inside and outside the HoB boundary as well as assessing the likely impacts on priority species and the drivers that are forcing the change.

The report finds that, although the Heart of Borneo is faring better than the island of Borneo as a whole, 10% or 2 million hectares of the Heart of Borneo forests have still disappeared since the Declaration was signed in 2007. Some continued deforestation was to be expected as much of the HoB consists of working production landscapes, but if deforestation continues at the current rates many of the forest types will fall below the levels identified by experts as the minimal levels required to maintain ecological function.
The key reason for forest loss is the conversion of natural forest concessions to non-forest uses such as plantations. Fires are another pressure, and some losses are caused by illegal land clearance (such as incursions into protected areas).

The report indicates that the Bornean elephants that range between Sabah and Kalimantan was losing significant areas of habitat due to the deforestation. Changes in hydrology can also have impacts on millions of people that depend on the watersheds and rivers the forests of the HoB protect.

However, the report also suggests that hope still remains. The Heart of Borneo is still a massive area of over 17 million hectares of rainforest and the coverage of most forest types is still well within target levels. The foundations, transboundary partnerships and philosophies that were established by the HoB Declarations remain a strong basis for conserving these forests. These recognized a choice of development or environment was inherently unsustainable and the future relies on balancing the two through greeneconomies.

Dr. Prabianto Mukti Wibowo, Head of the Indonesian HoB National Working Group, says, “Despite the many challenges in the Heart of Borneo, the governments of Brunei Darussalam, Indonesia and Malaysia are highly committed to reduce these deforestation rates. It is our aim to reverse this worrisome trend to a future in which sustainable land uses prevail. Time is of the essence; we should act fast. So together with HoB stakeholders we will prioritize our efforts on implementation of RSPO and particularly Indonesian Sustainable Palm Oil (ISPO) in Kalimantan, promotion of good (responsible) mining practices, and green infrastructure in area for development.”

Tackling the deforestation rates in the Heart of Borneo and delivering the vision of the HoB Declaration is going to need a significant increase in effort from all three Bornean governments and from the partner organizations that support them. “We have time to turn this around, but we must act now. Spatial intervention is priority with this finding of deforestation rate in HoB. WWF expects, for Indonesia, the Government Regulation for HoB as National Strategic Landscape (KSN) can be issued soon as one step to address this challenge,” states Anwar Purwoto, Director of Sumatra and Borneo of WWF Indonesia.

"Policies that recognize the value of natural capital and that incentivises sustainable management of natural capital need to be formulated to improve the conservation of natural areas in the HoB. Civil societies should mobilise rural communities as these communities are equipped with traditional knowledge on natural resource management. There is also a need to engage the business community and advocate companies to adopt green practices in the HoB area," said Conservation Director of WWF-Malaysia, Dr Sundari Ramakrishna.

Note to Editors:
• Full report is downloadable here
• Borneo
Borneo is the world’s third largest island and home to vast swathes of tropical rainforest. Despite representing just 1% of the Earth’s terrestrial surface, Boneo holds an estimated 6% of global biodiversity. Thirteen primate species have been recorded, 350 bird species and 15,000 species of plants. These include charismatic flagship species of global concern such as the Bornean orangutan, Sumatran rhinoceros and the Asian elephant as well as locally distinct species such as the rhinoceros hornbill, proboscis monkey and giant Rafflesia flower.

• The Heart of Borneo
The Heart of Borneo (HoB) describes one of the largest remaining areas of contiguous tropical rainforest left in the world and spans the territory of all three Bornean nations. Home to an immense wealth of biodiversity that includes elephants, rhinoceros and orangutans, the Heart of Borneo provides ecosystem services to an estimated 11 million people. Its importance was formally recognized by a Declaration from all three Bornean governments in 2007 which committed to cooperation for the conservation of the HoB. This commitment was reiterated by the new Ministers in a second Declaration in 2013. The environmental status of the Heart of Borneo was first measured in 2008, using historical and spatial as well as field data from 2007. The indicators developed from this analysis were measured for second time in 2013, using data from 2012 en 2010, resulting in the Environmental Status Report of the Heart of Borneo 2014.

• WWF Borneo Programme
The WWF Borneo Programme is a collaboration between WWF-Malaysia and WWF-Indonesia, supported by WWF's global network. Comprising over 50 different projects, the programme is aiming to conserve the forests of the 'Heart of Borneo' by working with the governments of Brunei, Indonesia and Malaysia to recognize the value of nature as part of a sustainable, green economy. More info, visit panda.org/borneo