The Shark Hero Takes on Weddings in 2017 | WWF Malaysia

The Shark Hero Takes on Weddings in 2017 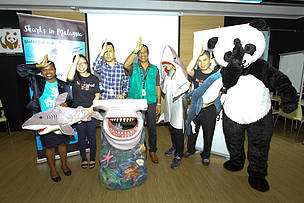 Petaling Jaya – WWF-Malaysia announced the continuation of its shark work by transforming business practices through business and industry engagement, in particular the wedding industry.

WWF-Malaysia Executive Director/CEO Dato' Dr Dionysius S.K. Sharma said, “The Shark Hero, My Fin My Life (MFML) campaign’s mascot, will champion the fight for sharks through the ‘Wedding without Fins’ project. The plight will continue with wedding planners to persuade soon-to-be-wed couples to opt for fin-free wedding banquets in 2017.

MFML campaign found Malaysians to be aware of the plight of sharks. Although they generally sympathised, most are not ready to commit to saving sharks and did not see WWF-Malaysia’s MFML pledge drive to stop consuming shark fin as an instrument to effect change. On the other hand, some Malaysians signed the pledge but claimed they will continue to eat shark fin soup.

Dato’ Dr Sharma said, “The campaign proved to be challenging in several ways. We started MFML in January 2016 with the hope for one million pledges saying no to shark fins and products by July 2016. However, Malaysians seem to need much more exposure and time to join the fight to save sharks.”

“A quarter of the way through the campaign, we revamped from ‘Break the Bowl Challenge’ to ‘Be a Shark Hero’ to get more public attention. The individual pledges then starting coming in, which encouraged us to extend the campaign's deadline until 31 December 2016.”

“The Shark Hero image of MFML campaign resonated well with the social media audience, especially with the younger age group between 16 and 23 years old.”

Dato’ Dr Sharma added, “Mid way through the campaign, we reviewed the three campaign goals, and decided to retain the first goal to get one million individual pledges and the second goal to get 500 businesses to remove shark fin from their corporate dining menu. We dropped the third goal to sensitise 20,000 restaurants to phase out shark fin soup from their menus. This was due to difficulty in engaging with target restaurants and our taskforce being over stretched.”

At the end of MFML campaign on 31 December 2016, the goal numbers reached were: My Fin My Life was a highly ambitious campaign with minimal resources. It reflects WWF-Malaysia’s passion and commitment to save our marine wildlife.

Dato’ Dr Sharma said, “We found the campaign to be challenging and we need to learn to work better together. It is a good starting point to move shark protection in the right direction. Saving sharks requires everyone to join forces to deliver a bigger impact. It is a long-term initiative, and will take concerted effort from all stakeholders to reverse the dire situation and to see significant results in the rebound of shark populations.

“Take for example the Tun Mustapha Park (TMP), which took 13 years to establish. When TMP’s gazettement was celebrated in July 2016, the Sabah Tourism, Culture and Environment Minister proposed that the State Government create its own shark sanctuaries in the marine parks in Sabah to conserve sharks, including TMP. Thirteen years is a long process but it is well worth it, as TMP measuring almost 900,000 hectares will provide habitat protection to sharks,” explained Dato’ Dr Sharma.

With the next festive season on the horizon, WWF-Malaysia reminds Malaysians to be a Shark Hero and not consume shark fin soup or shark parts during Chinese New Year.

Dato’ Dr Sharma also announced that WWF-Malaysia celebrated its 45th Anniversary on 13 January 2017. Since its establishment in 1972, WWF-Malaysia has been dedicated to protecting both terrestrial and marine wildlife, and advocating for better environmental policies and spatial management. Public activities to celebrate the 45th anniversary will be unveiled soon. 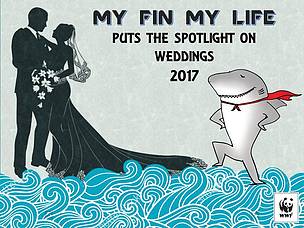 WWF-Malaysia will work with wedding planners to persuade soon-to-be-wed couples to opt for fin-free wedding banquets in 2017.
© WWF-Malaysia / Rahana Husin Enlarge
Like this article?