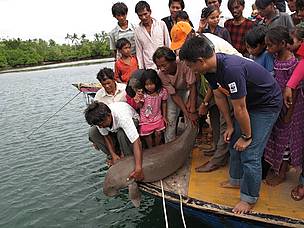 Juvenile Dugong released.
© WWF-Malaysia / Robecca Jumin
Kudat, 16 December 2009: A rarely seen dugong was saved by local fishermen in the proposed Tun Mustapha Park near Pulau Banggi. The dugong was found in a net by a Bajau fisher within the marine sanctuary in Pulau Maliangin Kecil early morning of 15 December. It was taken to Pulau Banggi, after members of the newly formed Maliangin Association PKR Abdan Abdul Majid and Cikgu Jaafar Muksan called for assistance. A rescue team from WWF-Malaysia with advice from Sabah Wildlife Department arranged for the dugong’s release back to sea at Kampung Pangasaan near Karakit, Banggi on the same afternoon.

The dugong found is a female juvenile measuring 1.5 metres of undermined sex. This marine mammal is an endangered and protected species which is rarely seen these days, but sightings of it were common in the past within the proposed Tun Mustapha Park. Pulau Maliangin Kecil is confirmed as a feeding ground for dugongs according to Leela Rajamani, dugong researcher, from the Borneo Marine Research Institute of Universiti Malaysia Sabah.

The discovery of the dugong further emphasises the importance of protecting areas within the proposed Tun Mustapha Park, including the Maliangin area which is currently being established in collaboration with local communities. Maliangin Santuary is a marine protected area pilot site proposed in August 2006 by the local community on Pulau Maliangin Besar, Department of Fisheries, Sabah and Sabah Parks. It aims to demonstrate these benefits of a marine protected area:
i.    Improvement in fish and other seafood stocks,
ii.    How collaborative management works to preserve marine resources,
iii.    Protection and improvement of marine biodiversity in the area, and
iv.    Improvement in the socio-economic status of the local community.

Robecca Jumin, Sulu-Sulawesi Marine Ecoregion (SSME) Programme Team Leader in Kudat, said “It is very encouraging that the local community reacted promptly by doing the right thing to inform the relevant authorities and help to release the dugong. It shows they are aware of the importance of protecting endangered species, such as the dugong, and that they believe in the benefits of a marine sanctuary. We hope they will continue to support the gazettement of the proposed Tun Mustapha Park so that they can reap the economic benefits of conserving biodiversity through collaborative management of marine resources.”

“Participatory and collaborative management arrangement is beneficial”, says Dr. Rahimatsah Amat, WWF-Malaysia Chief Technical Officer, Borneo Programme. Resource users provide extra hands that the governmental agencies lack and reduce governmental agencies’ operational costs. Management of this kind or environmental stewardship, has proven to be more effective, when resource users are given the responsibility to take care of resources that their subsistence or livelihoods depend upon.


WWF-Malaysia SSME Programme is currently implementing a project in Kudat to facilitate collaborative management of fisheries and marine resources among the stakeholders, the governmental agencies and district offices. Together with Sabah Parks, Department of Fisheries, the Fishing Boat-owners Association, teachers, and Kudat District Office, the Kudat Priority Conservation Area (PCA) Team works on building support for the proposed multiple-use Tun Mustapha Park.