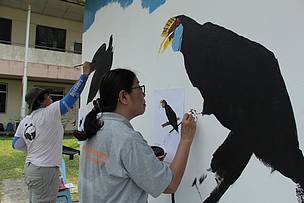 The mural painting project was a joint effort between WWF-Malaysia and Chung Hua Middle School No.3. Fifteen people comprising WWF-Malaysia staff and interns, teachers/local artists and student from the school painted the mural from 13 to 15 August.

The idea of highlighting these birds in the mural stems from WWF-Malaysia’s aim to create appreciation for the beauty, grace and wonder of these awesome birds in Sarawak. Hornbills are also one of the animal groups targeted in the organisation’s conservation work in the state.

Only eight hornbill species can be  found in Sarawak and they are categorised as Totally Protected Species under the Sarawak Wild Life Protection Ordinance 1998.  Our hornbills are threatened by hunting, especially for their feathers as cultural headgear and attire in ethnic culture. Such hunting was especially rampant in the past. Even up to this day,  these birds continue to be poached for the illegal wildlife trade. Hornbills are also threatened by habitat loss due to developments and conversion of forests to other non-forest land uses.

Globally, in the International Union for Conservation of Nature (IUCN) Red List of Threatened Species, hornbills are listed as threatened species, with rhinoceros and wreathed hornbills listed as vulnerable while the white-crowned and wrinkled hornbills as endangered.

WWF-Malaysia International Climate Initiative Project Manager Cynthia Chin said  hornbills are iconic species in Sarawak. Without their existence, the state might lose her unique identity which is highly associated with these majestic birds.

“Therefore, WWF-Malaysia sees mural painting or street art as an opportunity to create awareness to the public on the importance of conserving wildlife in Sarawak.”

“We want to create a positive impression towards these magnificent birds, in the hope that it will trigger positive actions from members of the public, and influence the authorities, as well as decision makers, to come up with a common roadmap in conservation where the health of nature, well-being of people and future of our planet are all linked together locally and globally,” she elaborated.

Chin said a new deal for nature is needed now. This is because WWF’s Living Planet Report 2018 revealed that, “At global level, nature continues to degrade, with devastating effects for wildlife and the planet. Global populations of fish, birds, mammals, amphibians and reptiles have decreased by an average of 60% between 1970 and 2014. If concrete actions are not taken, we are at risk of losing everything.”

She thanked Chung Hua Middle School No. 3 for its support in the mural project and local artists Jacinta Chan, a retired biologist teacher, and Kho Thong Soon, who is an arts teacher, for their technical and artistic guidance.

“We hope that through students and teachers direct involvement in the mural project, it will be an inspiration and motivation for them to help conserve our forests and wildlife. Hopefully the message is passed on to their friends and parents outside of school.”

“We plan to paint a few more murals in the state featuring other threatened species like the sun bear, pangolin and orangutan and civet, and hopefully schools, building owners and authorities concerned will be supportive of our efforts,” she added.

Rhinoceros and wreathed hornbills in the making.
© WWF-Malaysia/Ezen Chan Enlarge 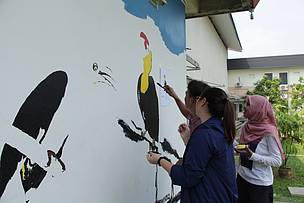 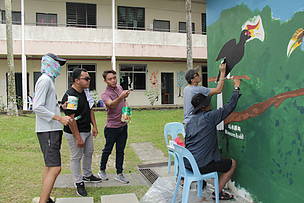 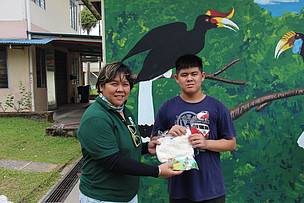 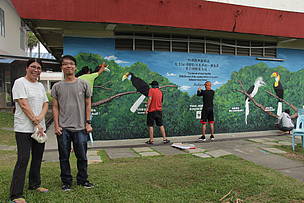 A big shout out to local artists Jacinta Chan (left) and Kho Thong Soon for their technical and artistic guidance.
© WWF-Malaysia/Ezen Chan Enlarge 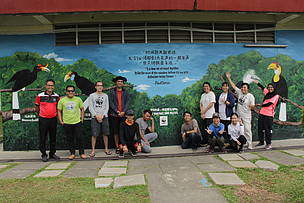