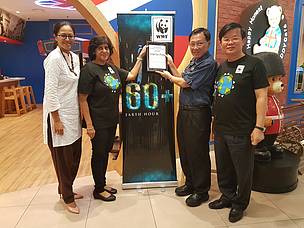 Penang – Earth Hour will take place for the fourth time in Penang. This time around it will be a 5 km, Earth Hour Night Walk, which will start and end at Lebuh Lintang, next to 1st Avenue Mall, Penang on 25 March 2017, between 8.30pm to 9.30pm. Penang State Executive Councillor for Local Government, Traffic Management and Flood Mitigation, YB Tuan Chow Kon Yeow has announced the pledges for Earth Hour 2017 as followed :-

i. All state government offices/agencies to be Penang Green Office certified with carbon reporting by 2020.
ii. To achieve 50% recycling rate for the state of Penang by 2020.
iii. To convert 20,000 unit street lightings to LED lightings by 2020.

“Earth Hour is not just about going dark for a single hour every year. It calls us to review and change our overall lifestyle and reduce our carbon consumption throughout the year. Earth Hour reminds us to care for our environment and natural resources,” said YB Tuan Chow Kon Yeow. “The Penang State government views continuous sustainability efforts seriously, and being the finalist for WWF’s Earth Hour City Challenge 2016 (EHCC) has inspired us to strive harder towards a greener city,” he added.

Penang state government, with the help of Penang green council, is carrying out a survey to assess the perception of Penang residents towards climate change. It aims to provide policy makers with a better understanding of public perception and Penangites’ awareness of climate change issues. The survey, which could be the first of its kind by a state government in Malaysia, seeks to be an informative tool, providing accurate information and clues for developing strategies and public policies to make Penang a more sustainable and greener state.

“On 25 March 2017, WWF will once again bring together millions of people to shine a light on climate action and the role people can play in global efforts to change climate change,” said WWF-Malaysia Conservation Director Dr Sundari Ramakrishna. “Earth Hour reminds us that while people are on the frontlines of climate change, they are also our first line of defence. Our actions today, as individuals and the global community, have the power to transform what the world will look like for generations to come -- the time to act against climate change is now,” she added.

Commenting on the partnership, Dr Sundari said, “We are happy to collaborate again with the State Government of Penang for the fourth time. An EHCC finalist, they have inspired others through their efforts to preserve and protect Penang's natural ecosystems for generations to come. Penang has introduced green building strategies among other sustainability measures in its attempt to reduce the city’s carbon footprint.” In addition to the Penang State Local Government, Traffic Management and Flood Mitigation, PAAA and MPPP, Earth Hour 2017 Night Walk is jointly organised by 1st Avenue Mall.

“We are honoured to work together with WWF-Malaysia on this noble event and rally people, especially the younger generation, on the importance of conserving the world’s biological diversity and the sustainable use of our natural resources,” said Mr. John Liew, Centre Manager for 1st Avenue Mall.

Celebrated across a record-breaking 178 countries and territories, 2016 witnessed yet another spectacular Earth Hour as communities, businesses and governments joined forces to shine a light on climate action. Millions came together to show their support and passion to change climate change!

Everyone is invited to take part in the Earth Hour 2017 Night Walk. Registration is RM65 per participant and can be made at pandashop.my/earthhour2017. All walk participants will receive an Earth Hour 2017 100% organic cotton T-shirt as well as a medal made from recycled remnant wood and Forest Stewardship Council wood veneers. All funds raised will be channelled to WWF-Malaysia’s conservation efforts.
---Ends--- 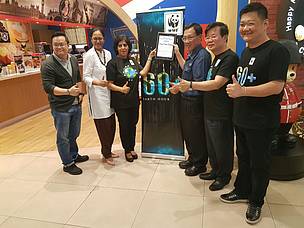