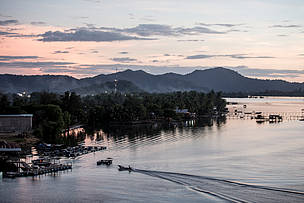 Mengkabong river, Tuaran, Kota Kinabalu, Sabah, Malaysia
© James Morgan / WWF-US
Climate change has been an ongoing topic of discussion since the mid-20th century; it is seen and felt through changes in biodiversity and ecosystem services in both terrestrial and marine.

To measure the impacts and understand how a coastal community is affected by climate change, a vulnerability assessment tool - Coastal Integrated Vulnerability Assessment Tools (CIVAT) - was used in this study.

Coastal Vulnerability Assessment for Climate Change in Lahad Datu was conducted by WWF-Malaysia in collaboration with University Malaysia Sabah (UMS) between April to May 2015.

The purpose of the study was to have a better understanding on climate change and its impact on low-lying areas.

The objectives were to determine the vulnerability of coastlines and provide recommendations for climate change adaptation for the community in the coastal area of Lahad Datu, who are vulnerable to the impacts of climate change.