Ulu Muda Under Threat From Poaching 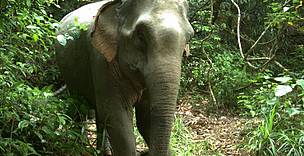 An adult Asian Elephant in Ulu Muda recorded by a camera trap.
© WWF-Malaysia
KUALA LUMPUR: WWF-Malaysia urges anti-poaching efforts to be ramped up in Ulu Muda Forest Reserve following recent concerns raised by the Kedah Department of Wildlife and National Parks (Perhilitan) suggesting that wildlife populations in the forest reserve are in decline.

According to local reports, Kedah Perhilitan director Jamalun Nasir said that camera traps set up by the department in the forest reserve have recorded fewer animals over the past few years, attributing it to illegal poaching and illegal logging activities in the area. He added that the decrease emphasised the seriousness of the threat faced by Ulu Muda and its wildlife.

Besides being a haven for biodiversity, Ulu Muda is also an important water catchment area for the northern states of Peninsular Malaysia, namely Kedah, Penang and Perlis. Protecting its forests from illegal poaching and other damaging activities will have a positive domino effect that not only saves our wildlife, but also the forests that we rely on for our water supply. In this age of climate uncertainty, we cannot afford to allow our natural resources to be plundered.

In light of this pressing threat, the launch of Ops Khazanah by the Royal Malaysian Police to stem out tiger poaching is indeed timely. When it comes to the management of a natural area, we cannot stop at passing legislation and introducing policies. It is the enforcement on the ground, through initiatives such as Ops Khazanah, that ensures our laws are adhered to and those contravening them are punished accordingly.

While tiger landscapes such as Belum-Temengor, Taman Negara and Endau-Rompin are focus areas due to the urgency in averting the threat of extinction faced by the Malayan tiger, poachers do not recognise borders – their only goal is to cash in on the exploitation of our wildlife and will take advantage of any gaps in our monitoring and enforcement.

Therefore it is vital that anti-poaching operations are implemented in Ulu Muda as well, as it is part of the northern reaches of the Central Forest Spine and borders Thailand, making it particularly vulnerable to foreign poachers. Having more boots on the ground will lead to the capture of those responsible for crimes against our nature and wildlife, in addition to deterring would-be poachers and encroachers.

The Ops Khazanah task force, comprising personnel from Perhilitan and the Senoi Praaq, has already carried out numerous successful joint operations and apprehended dozens of suspected poachers in Perak, Pahang, Terengganu, Johor and Kelantan since its launch in September. WWF-Malaysia commends their on-going efforts and encourages continued support for the operation and its relevant agencies.

It is our hope that long-term plans to scale-up Ops Khazanah will be included in the 12th Malaysia Plan, which is set to be presented next year. If we do not invest the necessary resources to conserve and protect our natural heritage now, we stand to lose them forever.

An adult Asian Elephant in Ulu Muda recorded by a camera trap.
© WWF-Malaysia Enlarge
Like this article?