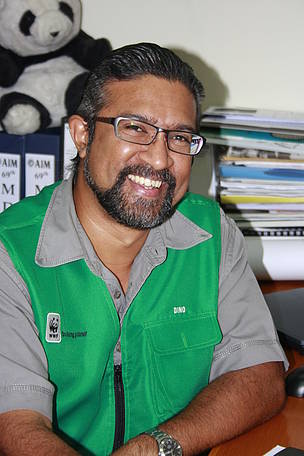 Dato’ Dr Dionysius Sharma, the Executive Director / CEO of WWF-Malaysia.
© WWF-Malaysia / Rahana Husin
Kuala Lumpur: As WWF-Malaysia looks back at 2017, we are extremely saddened at the number of fatal incidents involving iconic and endangered species; including the most recent deaths of two sun bears and a Malayan tapir on Christmas Eve (December 24, 2017).

In Peninsular Malaysia, a sun bear was killed in an accident along the East Coast Expressway 2 in Terengganu, while a Malayan tapir was killed in another accident in Gua Musang, Kelantan. The tapir was also skinned and disfigured by a group of men who discovered the carcass the following day. We strongly condemn acts of wildlife crime such as this, where the carcass of an animal is mutilated without consideration.

It is also imperative to bear in mind that highways close to natural wildlife habitats are at high risk of accidents, and therefore, a higher rate of wildlife deaths, if precautions are not taken. We cannot emphasise enough the need for Malaysian drivers to be more vigilant and alert while driving in areas that are prone to wildlife crossings, to avoid more unfortunate incidents like these from happening.

In a separate incident in East Malaysia, another sun bear was discovered being sold in parts at a local market in Kuching. WWF-Malaysia urges the public once again to step away from consuming wild meat, particularly during festive celebrations, in an effort to preserve our unique wildlife. This act of responsible consumption will go a long way in protecting wild species such as the sun bear.

As an organisation dedicated to the conservation of biological diversity, a huge amount of our time is committed to empowering and encouraging positive change in the way we protect our planet – wildlife included. Despite all efforts from various organisations and government bodies, yet again, we as a nation, have failed to stand up for our Malaysian wildlife. If we do not take drastic measures to protect our wildlife now, we may lose them to extinction in the near future.