The Wild Diaries Chapter 1: A Chance Encounter With The Mighty Tiger | WWF Malaysia

The Wild Diaries Chapter 1: A Chance Encounter With The Mighty Tiger 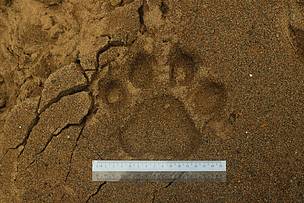 Fresh, wet pugmarks by the riverbank.
© WWF-Malaysia / Dinesh Khanna Thillainathan
The Wild Diaries is a chronicle of actual experiences from the wilderness, documented by our brave and committed wildlife warriors who dedicate their lives to protecting our planet.

CHAPTER 1: A CHANCE ENCOUNTER WITH THE MIGHTY TIGER

It was the sixth of an eight-day joint patrol with wildlife monitoring officers from Perak State Parks Corporation. WWF-Malaysia’s anti-poaching unit – Dinesh, Mazlan, Rahman and Azman – were used to long treks. A regular field trip would usually last anything between six to twelve days, depending on accessibility. For this trip, the team was tasked with carrying out patrolling, with the use of Spatial Monitoring And Reporting Tool (SMART).

Dinesh wiped away the beads of sweat trickling down his face. “It’s blistering hot!”, he thought to himself. The rest of the team looked like they needed a break from the unforgiving heat as well. He suggested that they take a breather closer to Sungai Tebang. The river would bring some relief from the scorching sun.

As the team trekked towards Sungai Tebang from Sungai Tiang, they suddenly noticed fresh, wet pugmarks by the riverbank.

“That means a tiger must’ve just crossed the river!”

Everyone was both excited and intimidated by the possible presence of this magnificent beast.

“Keep a lookout guys,” said an equally excited Dinesh, as the team continued to trek and vigilantly look for wildlife signs.

A SIGHT TO BEHOLD

As they arrived close to Sungai Tebang, a breathtaking scene greeted them – a small, secluded green valley against a brilliant blue sky. A natural green canopy flanked the clear waters of the river, which revealed a rocky bed underneath. Indeed, it was a sight for sore eyes.

Landscapes like these are fast disappearing in current times, with widespread logging and deforestation. This causes wildlife habitats to become smaller, fragmented and degraded.

The team slowly started to trek across the beautiful valley. Suddenly, without any warning, a huge tiger leapt into the sunlight! Everyone froze as the giant beast turned and locked eyes with them for a good 10 seconds. It was barely twenty metres away from where they were.

Dinesh held his breath as he allowed his senses to take in the gorgeous animal in front of him – such a large animal, yet so agile and nimble. The tiger’s majesty and presence was incredibly strong, yet humbling all at once.

The tiger purred (much to everyone’s surprise!), and immediately turned around, bounding back into the safe and protecting arms of Mother Nature once again.

The team was stunned at what they had just witnessed! It appeared as if the tiger was resting in the shallow waters, probably also trying to cool itself off. It is extremely difficult and rare to come across a wild tiger these days. The last sighting of a wild tiger by the field team was in July 2016 (almost a year ago).

He left as quickly as he arrived.

The team looked at each other with amazement. What a magnificent sight indeed!

They quickly set up a camera-trap not far off from where the tiger was spotted, and slowly headed back to the campsite for the day.

WHEN WORK BECOMES AN EXPRESSION OF LIFE

The forest trail is rich with vegetation and animal tracks, like those from tigers, sambar and barking deer, wild boars and tapirs. The opportunity to call the forest his workplace is exactly why Dinesh decided to join WWF-Malaysia three years ago. His current position with the Northern Banjaran Titiwangsa landscape in Peninsular Malaysia as an anti-poaching officer is full of interesting challenges and adventures.

Poaching and the illegal wildlife trade is the most critical and urgent threat to the survival of Malayan tigers today in Malaysia.

“Every trip is different, even if the routes may be the same,” shares Dinesh. “My job allows me to be close to nature every day. This is what I love about it - I choose to love wildlife, and in that process, I choose to love life.”
This chance encounter with the mighty tiger was most certainly a precious memory that Dinesh and the rest of the team will cherish always.

Officers like Dinesh work every day to protect our Malayan tiger, a symbol of national pride in our country. There are only 250 - 350 tigers left in the wild today (down from almost 3,000 in the 1950s). The alarming rate of decline in numbers has rendered the Malayan tiger as “Critically Endangered” on the IUCN Red List. In other words, it means that if we just choose to be silent observers, it is highly likely that the Malayan tiger will be lost forever.

Take an active step towards saving our Malayan tiger. To find out more, click here. 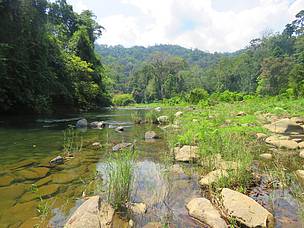