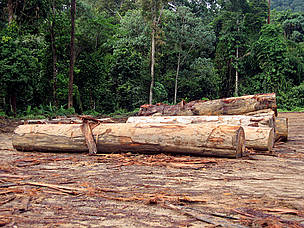 Signs of logging at the project site
© WWF-Malaysia
Petaling Jaya – A Detailed Environmental Impact Assessment (DEIA) has revealed that the Terengganu state government has proposed to extract all commercially valuable timber in 12,630ha of forest adjacent to the 6,130ha of forest reserve currently being cleared for the construction of two hydropower dams.

The Tembat and Petuang Forest Reserves, which also act as a water catchment area for Tasik Kenyir, are currently being logged to build the Puah and Tembat dams and are home to the critically endangered Sumatran rhinoceros and endangered Malayan tiger. The forest reserves also fall within the dam catchment area.

Satellite images in the DEIA indicate that clear felling of the reservoir area and adjacent hills has begun since 2005-2006. According to the DEIA, the site of the catchment area has already experienced changes of between 25 - 30% and new logging tracks have already been constructed.

“Evidence on the ground also suggests that logging and clearing of the reservoir area has already proceeded prior to the approval of the DEIA. There seems to be little regard for relevant laws and the DEIA process,” informed Dato’ Dr. Dionysius Sharma, CEO of WWF-Malaysia.

A survey conducted as part of the DEIA has revealed evidence of the presence of the elusive Sumatran rhinoceros within the Tembat Forest Reserve. As recently as August 2008, a survey conducted by the  of Department of Wildlife and National Parks’ (PERHILITAN) Sumatran Rhinoceros Task Force has revealed evidence of the same.  PERHILITAN's September issue of Berita Konservasi has reported that signs such as feeding trails and horn scratch marks were found within the reserve.

Both the forest reserves are also habitat for other endangered wildlife, namely the Malayan tiger and Malayan tapir which are totally protected animals under the Protection of Wildlife Act 1972.

The DEIA, which was available for public viewing recently, also states that 30% of the existing elephant population within the project area will be forced into nearby plantations, creating more human-elephant conflict. Conflict is already occurring near the Tembat Forest Reserve, with cases reported in Hulu Setiu and Hulu Nerus. This will result in loss of revenue to plantation owners and property damages. In the long run, the government will incur higher cost for human-wildlife conflict management.

Dato’ Dionysius also expressed his concerns on the anticipated high erosion rate due to the logging activity and forest clearing in the catchment, leading to deterioration in river water quality.

“The Kelah fish population found in rivers there will undeniably decrease. Kelah has high conservation and commercial values,” he said. He also added that eco-tourism activities will be affected, translating to loss of revenue to the eco-tourism operators in the area.

This is confirmed by the DEIA report which states that ecotourism activities in Sungai Tembat and Sungai Terengganu Mati will be affected as the river water quality will decrease. The DEIA also states that high soil erosion and sedimentation will affect fish biodiversity and spawning grounds.

Dato’ Dionysius further stated that logging in a dam catchment forest will increase siltation and could reduce the dam lifetime in the long run, even if logging was only carried out during the construction stage of the dam.

Dato’ Dionysius stressed that the Petuang and Tembat Forest Reserves must be gazetted as water catchment forests under the National Forestry Act 1984. Additionally these forests can be classified as forests for wild life sanctuary under the said Act.

“The forest reserves should be regarded as protection forest. Logging or clear felling should not be allowed to take place at any time. This is also in line with the National Physical Plan which states that all catchment forests of existing and proposed dams are considered as Environmentally Sensitive Area Rank 1, therefore logging, development and agricultural activities are not permitted in these areas.” he said.

Signs of logging at the project site
© WWF-Malaysia Enlarge 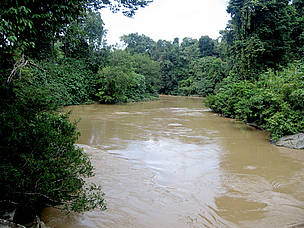