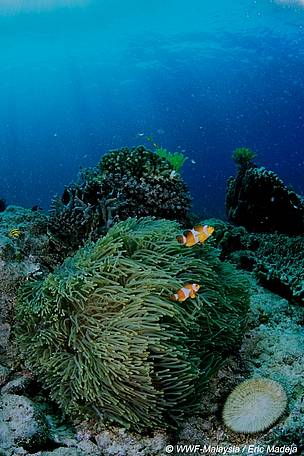 The coral reefs of the Sulu Sulawesi Marine Ecoregion, at the Apex of the Coral Triangle, are among the most biodiverse in the world
© WWF-Malaysia/Eric Madeja
14 May 2014, Manado, INDONESIA: WWF applauds the governments of the six Coral Triangle countries for launching the Coral Triangle Marine Protected Area System (CTMPAS) Framework and Action Plan today at the World Coral Reef Conference.

“With effective management and investment, these areas can help reduce pressure on fish stocks by preventing overfishing, destructive fishing, and habitat degradation—the very threats causing fish stocks to decline. They will lead, over time, to increases in fish populations, size, and biomass, allowing spillover to nearby fishing grounds,” adds Thomas.

The CTMPAS Framework and Action Plan, endorsed in 2012 by the six Coral Triangle countries, contains criteria for the effective management of Marine Protected Area (MPA) and guides the development of a system of MPAs in the region.

The launch recognizes the first set of regionally-significant MPAs in the Coral Triangle region.

Biggest MPA in Malaysia
One of the flagship marine areas being touted as part of this regional system of protected sites is the Tun Mustapha Park (TMP) in Sabah, Malaysia—a globally-significant priority conservation area in the Coral Triangle, threatened by overfishing, destructive fishing, and pollution.

The Malaysian State of Sabah has made the commitment to gazette TMP by 2015 and WWF is currently advocating for the Sabah government to meet this target.

“The CTMPAS Framework and Action Plan provides a much needed boost for gazetting this site and will help secure food and jobs for communities that are mostly made up of fishermen and fish traders,” adds Jumin.

An exemplary regional platform for food security and livelihoods
The six Coral Triangle countries–Indonesia, Malaysia, Papua New Guinea, Philippines, Solomon Islands and Timor-Leste—came together in 2007 to form a multilateral partnership to safeguard the marine and coastal resources of the Coral Triangle region. The landmark initiative is now known as the Coral Triangle Initiative on Coral Reefs, Fisheries and Food Security (CTI-CFF).

The CTI-CFF is an example of a regional framework under which governments, private sector, civil society, donors and development partners collectively aim for the sustainable management of marine resources with the goal of protecting the critical marine ecosystems essential to support food security and livelihoods in the Coral Triangle.

With more than 120 million people directly dependent on the region’s finite marine resources, protecting and managing key areas that are critical to food and livelihoods has been one of WWF’s priorities in the region.

“Ignoring marine habitat protection means risking the future of humanity. We urge governments from other parts of the world to follow this exemplary initiative of Coral Triangle countries and provide more investments in ocean protection for people’s wellbeing,” says Thomas.


Notes to the Editor:
 The Coral Triangle—the nursery of the seas—is the world’s center of marine life, encompassing around 6 million sq km of ocean across six countries in Asia-Pacific – Indonesia, Malaysia, Papua New Guinea, Philippines, Solomon Islands, and Timor-Leste.
 It is home to 76% of the world’s known coral species, 37% of the world’s coral reef fish species, and commercially-valuable species such as tuna, whales, dolphins, rays, sharks, including 6 of the world’s 7 known species of marine turtles.
 The Coral Triangle directly sustains the lives of more than 130 million people and contains key spawning and nursery grounds for tuna. Its reef and coastal systems also underpin a growing tourism sector.
 WWF is working with governments, local communities, businesses, and consumers to promote sustainable development in this region. For information on Coral Triangle go to: www.panda.org/coraltriangle
 Follow us on Twitter: www.twitter.com/Coral_Triangle
 Like us on Facebook: www.facebook.com/thecoraltriangle

The coral reefs of the Sulu Sulawesi Marine Ecoregion, at the Apex of the Coral Triangle, are among the most biodiverse in the world
© WWF-Malaysia/Eric Madeja Enlarge
Like this article?