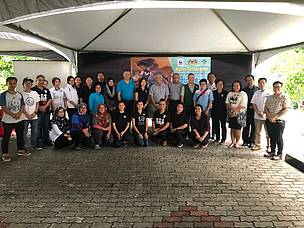 Illegal wildlife trade is rampant in Sabah particularly due to the fact that the profit earned from trade is high. Poachers and illegal wildlife traders stand to earn lucratively from their sale of prized wildlife such as turtles and pangolins. However, though these acts are crimes as recognised by law, the penalties received do not reflect the severity of the crime.

At present, convicted offenders receive lenient sentences that do not commensurate with the profit that they stand to gain. The impact of their actions - which will likely result in the loss of entire wildlife populations - are also not given adequate consideration when meting out penalties.

Seeing the need for wildlife crime to be treated with utmost importance, the Environmental Court - a court specialised in environment-related cases - was launched in 2015 under the guidance of the former Chief Judge of Sabah and Sarawak Tan Sri Datuk Seri Panglima Richard Malanjun.

In order to strengthen and enhance the Environmental Court, the judiciary discussed the need for sentencing guidelines beginning with a Sentencing Guideline for Wildlife Crime. Its first workshop to establish these guidelines was officiated by Malanjun in 2017.

Subsequently, a green criminologist from the WWF-UK was connected to the judiciary by WWF-Malaysia to assist and advise on the guidelines. As the Sabah Wildlife Conservation Enactment 1997 (WCE 1997) is the only legislation that has jurisdiction over the management of wildlife in Sabah, it became the only reference used for the guidelines on wildlife crime.

Through several workshops and meetings conducted over the past two years between the judiciary, the Attorney General Chambers and the Sabah Law Association, as well as supported by WWF-Malaysia, the guidelines are now in place.

“The discretion of Judges and Judicial Officers is not hampered by the guideline in any way at all when meting out sentences but any departure from it must be premised on sound reasons. The guideline takes into account the level of culpability of the offence, level of harm caused by the accused, and of course the aggravating and mitigating factors presented by the prosecution and the accused/defence,” said Datuk Seri Panglima David Wong Dak Wah.

WWF-Malaysia applauds the Sabah Judiciary on its efforts in creating the guideline to further address environmental and wildlife crime. With this guideline, WWF-Malaysia hopes that crimes against wildlife are taken seriously by would-be perpetrators and that they are encouraged to be mindful and abiding of the law.

“Sabah is blessed with rich biodiversity, which no doubt attracts irresponsible individuals or groups looking to profit from it in an unsustainable manner. The population numbers for most of our prized wildlife like turtles, pangolins, sun bears and clouded leopards are dwindling in part due to illegal wildlife trade. We hope that these guidelines will help create a stronger deterrent to keep poachers away from wildlife be it in our forests or in our seas,” said Dr. Henry Chan, Conservation Director of WWF-Malaysia.

WWF-Malaysia (World Wide Fund for Nature-Malaysia) was established in Malaysia in 1972. It currently runs more than 90 projects covering a diverse range of environmental conservation and protection work, from saving endangered species such as tigers and turtles, to protecting our highland forests, rivers and seas. The national conservation organisation also undertakes environmental education and advocacy work to achieve its conservation goals. Its mission is to stop the degradation of the earth’s natural environment and to build a future in which humans live in harmony with nature, by conserving the nation’s biological diversity, ensuring that the use of renewable natural resources is sustainable, and promoting the reduction of pollution and wasteful consumption.  For latest news and media resources, visit http://www.wwf.org.my/media_and_information/media_centre/

YAA Datuk Seri Panglima David Wong Dak Wah, Chief Judge of Sabah and Sarawak together with the Sabah Judiciary and WWF-Malaysia at the launching of the Sentencing Guideline for Wildlife Crime in Kudat.
© WWF-Malaysia Enlarge 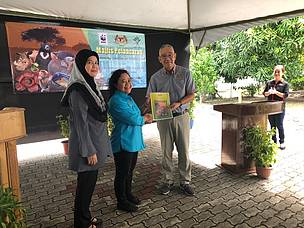 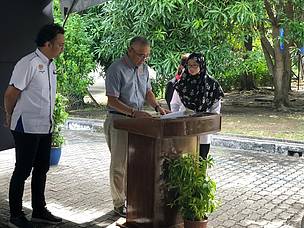