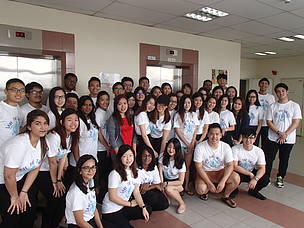 A cheerful group photo of Mr Kevin Lowrence (back row, fourth from right), Ms Suan Tan (back row, third from right) and Ms Uma Muthusamy (front row, fourth from left) and the Northwood University Degree Program Biodiversity course students.
© Photo courtesy of IICS
With the support of Mr Kevin Lowrence, Acting Dean of IICS’s Center for American Education, the Career Services department, as well as the encouragement and guidance of their lecturer Ms Uma Muthusamy, the students of the Northwood University Degree Program Biodiversity course built support and raised about RM4,000 for WWF-Malaysia’s turtle conservation efforts from August to November 2017.

The project kicked off with an educational field trip to WWF-Malaysia’s Melaka hawksbill turtle conservation project site on 7 October, where students learned more about the threats and efforts to conserve marine turtles from the Turtle Guardians themselves. The Turtle Guardians patrol the beaches every night during nesting season to collect data on marine turtles to enhance conservation efforts, deliver eggs to the safety of the nearby hatchery so that they are not eaten or sold in markets, as well as release hatchlings from the hatchery back to the sea.

The students then honed their teamwork, organisational and communications skills preparing and executing a two-day mini carnival on 13 and 14 November 2017. They exercised their planning and problem solving skills by taking pre-orders for T-shirts, selling cash coupons and renting canopies to secure income and capital just in case it rained during the carnival and sales were slow.

Their meticulous planning paid off as it did rain on 14 November, but the students persevered and were able to raise funds through their food and drink booths, game booth, performances and photo booth during the mini-carnival. The students also had an innovative exhibition with the centre piece being a giant turtle made up of plastic bags, cups and empty cans. This eye-catching display highlighted how people can help conserve turtles by reducing waste and recycling so trash does not end up polluting our seas.

“I would like to thank Ms Uma and the students for having the courage to take on this Employer Project and for putting in the time and effort to not only deliver, but achieve double, the target. I also thank WWF-Malaysia for their guidance to the students over the years, and working with us on these projects that really impact biodiversity conservation. I hope that the students will take the key learnings from this project beyond this semester, because responsibility and sustainability are relevant to all fields, whether you are an Environmental Science or Business student. 100% of INTI Northwood University graduates are hired within six months of graduating, and it is projects like this that make you all stand out, and demonstrate your quality and potential,” said Mr Kevin Lowrence, Acting Dean of the Center for American Education, INTI International College Subang.

“We extend our heartfelt thanks to Ms Uma and her students for their meaningful and valuable support of our conservation efforts. We also sincerely thank Mr Kevin Lowrence who undertook INTI International College Subang’s very first Employer Project for WWF-Malaysia in 2012, which started a happy and successful collaboration for conservation. We commend the students for applying and honing what they have been taught; which includes 21st century skills: creativity, communications, critical thinking and collaboration, during this Employer Project. They have delivered double of the original target and we congratulate them on their great achievement. WWF-Malaysia appreciates to have the opportunity to work with INTI’s inspiring lecturers and incredible students and we hope to have the privilege to work together again in future,” said Ms Suan Tan, Brand Activation Senior Manager of WWF-Malaysia. 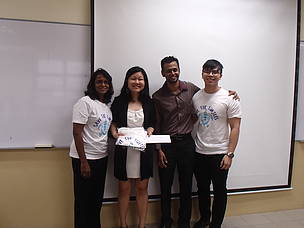 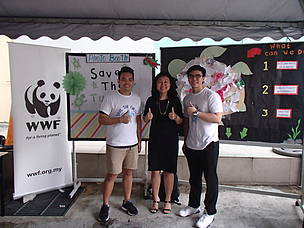 Ms Suan Tan (centre) and student project leaders at the mini-carnival. In the background is the innovative exhibition centre piece: a giant turtle made up of plastic bags, cups and empty cans.
© Photo courtesy of IICS Enlarge
Like this article?